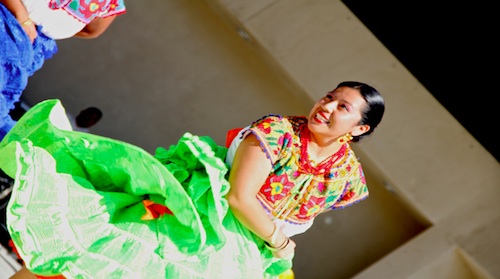 La Guelaguetza is coming back to Kern County this weekend.

La Guelaguetza is a traditional Hispanic event meant to merit recognition to indigenous cultures. This event is typically held in Oaxaca, Mexico and goes on during the second Monday in July to honor La Virguen del Carmen.

At La Guelaguetza, meaning to offer or to gift, they will be distributing goods like weaved baskets and fruits after each dance. There will also be traditional, indigenous face painting, and coloring projects available for children.

“The eight regions of Oaxaca all come together, and they all share what each region has,” says Glady’s Flores, an organizer of the Guelaguetza. “They bring their music, their folkloric dance, and whatever goods they produce from their region.”

This event has not been held in Kern County since October 2014 at CSUB due to the sickness of the Executive Director.

“When our Executive Director got sick, everybody within the board decided to leave it and nobody took on Guelaguetza, because it is a big event,” said Flores.

However, now it is starting up again on Sunday, Oct. 10 in Lamont.

The reasoning behind this event being held in Lamont is because they have a large indigenous community, and it is in the middle of Bakersfield, Arvin, Taft, etc, so it makes it easier for more people to attend.

“There is a big concentration of indigenous in Lamont, so we put it in the center for anybody from Bakersfield, Taft, and Arvin,” says Flores.

Due to an earthquake that struck Oaxca horrendously in 1920, La Guelagutza was a way to boost morale and to honor la Virguen del Carmen; however, as time went on, the event became more modernized resulting in it being an event held every year in Oaxaca to showcase their dances and other things stemming from one of the eight regions of Oaxaca.

La Guelaguetza has a huge cultural meaning in Mexico, and is very important for it to be shared among others hence the reasoning as to why it is being held. Learning and acknowledging indigenous culture is a vital part of the community, especially in a community where most of the population is Hispanic, such as in Kern County.