Arvin’s We the People prepares for State competition 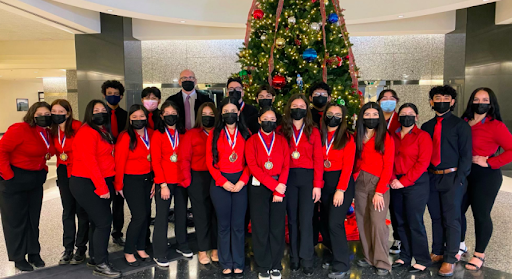 Arvin High School’s We the People team was recognised by the Kern County Board of Supervisors for being the 21st Congressional District Champions;  now they are preparing to compete in State on February 5.

Nick Hernandez is the head coach of the team and he explains how much work and dedication the team puts in. When it gets close to the competition they put in more hours— about three to four hours per day—and every other day during class they continue to practice. On Saturdays, they meet from 9 a.m. to 3 p.m.

“It’s a great competition for a lot of students to get involved in. It does demand a lot of work , but anyone who sat down with We the People students from any of the Kern High schools can really say that the work that they put into is really amazing,” said Hernandez.

Lizbeth Gomez describes We the People as a team in which you learn a lot about the government and the way it functions.

“I decided to join We the People because I thought it was a great opportunity to learn about something as important as our government, and I wanted to become more of a knowledgeable citizen and I heard great things about it,” said Gomez.

Gomez explains that she has great support systems. The coaches are always there to help and the team is very supportive and are always rooting for each other.

Jessica Sierra chose to join because her sister joined; she wanted to try it out since government and history have always been such a fascinating topic to her. Additionally, she wanted to expand her knowledge on government and how the constitution works now that she is 18 and she can vote.

“It’s a very supportive community. We all work with each other and a lot of alumni come and help out the team so it’s not just Mr. Hernandez and the team, it’s all the alumni behind We the People who come and support us through the entire process,” said Sierra.

To her, it’s a supportive fun team that she loves. It is such a great community to take part of. She has also participated as a poll worker so she knows how the voting system works and how the creation of the constitution was formed.

“What keeps me motivated is the willingness to win, like to go to state and to know that you are the most knowledgeable at that competition in regards to everyone else there,” said Sierra.

Mercedes Espinoza got recruited to We the People after a debate in one of her classes. Debating is really fun for her and she decided to join We the People.

“I like the experience of learning because at the beginning, during my progress, and until now I learned a lot. And I realized that I didn’t know a lot because after all I am a U.S. citizen,” said Espinoza.

She describes We the People as a class of students who are interested in learning about the government and she feels like they are mostly eager to learn since they get to choose a class that they get to join.

We the People surpassed the goal of raising $15,000 to take the team to state. Coach Hernandez was very happy to know that the community was willing to help the team.

“I am really ecstatic. I am excited that the community was willing so effortlessly on those to raise the amount of money that we needed which is no small fee especially because of the pandemic it is much more expensive to organize a field trip that end up leaving the county, but ultimately I want to say that I am grateful for it but I am not surprised because Arvin has a pretty long history of raising tones of money for our program,” said Hernandez.

In 2013, when he was on the team they went to the National competition and it cost upwards of $40,000 just to send 25 students across the country to stay in DC or Pennsylvania. The community way back in 2013 was also able to save all that money for them.

Coach Hernandez is happy to be back in We the People helping other students reach for success. The students are working hard to achieve their goal and win State to compete in the National competition.